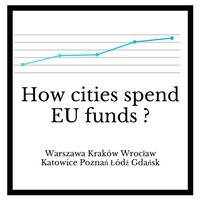 Katowice and Kraków are the most efficient in per capita spending of EU funds, with Łódź and Gdańsk at the other extreme.

Warsaw spending is effective thanks to funding for the metro. The city receives PLN 4.02 billion in financing under agreements signed by the capital's City Hall out of the 2014-2020 budget - PLN 2,290 per resident. The most expensive project is the extension of the second metro line and the purchase of new rolling stock (PLN 1.8 billion). The second line is to have six stations added to it by the end of November 2019. The second biggest subsidy (PLN 541 billion) will go towards the construction of 40 km of new sewerage network and the modernisation of 25.5 km of the existing one. All the projects qualify as part of the "Infrastructure and environment" (POIŚ) operational programme supervised by the MinDev.

Kraków invests in road and rail infrastructure. In 2014, Poland's second-biggest city signed contracts for EU co-financing worth PLN 1.84 billion, or PLN 2,408 per resident. As much as 66 per cent (PLN 1.2 billion) of Kraków's financing comes centrally from POIŚ and only 14 per cent (PLN 256 million) from Małopolska's regional operational programme (RPO) run by local government. The biggest grant was the PLN 320.3 million support for the construction of the S7 road in the city. Kraków also received PLN 187 million for the construction of rail junction between the districts of Zabłocie and Krzemionki.

Wrocław building suburban road links. Wrocław has signed a contract for PLN 1.26 billion of EU funds in the current financial perspective, PLN 1,978 per resident. As much as 36 per cent of the funds (PLN 455 million) will go to finance the construction of the S5 road from Korzeńsk to the city limit, implemented under the POIŚ. Of the total value of contracts signed by the city 24.9 per cent (PLN 314 million) has been allocated to the RPO in Dolny Śląsk, and 15 per cent (PLN 193 million) to the operational programme called "Intelligent Development", run by the MinDev.

Poznań finances the work of local government. Wielkopolska's capital has secured PLN 904 million of EU funds, or PLN 1,699 per resident. As much as 67 per cent of the funds (PLN 608 million) comes from the region's RPO. The single most expensive project, which will cost PLN 175 million, is the training and maintaining until 2023 of the staff implementing the region's RPO. The second biggest grant secured by the city amounted to PLN 68 million and was allocated to the creation of a genetic map of the Polish people. The Poznań University of Technology's project, involving the examination of the Poles' genome, is implemented under the POIR.

Łodź puts public transport first. Łódź secured PLN 879 million from EU funds from 2014 - PLN 1,263 per resident. The biggest investments in Łódź involve public transport and are implemented under the RPO, which received PLN 578 million from the funds. The biggest grant (PLN 182 million) was allocated to the construction of a cross-town tunnel in the centre of Łódź. PLN 70 million financed the purchase of twelve low-floor and low-emission trams for the city. Both of the biggest projects are implemented under the RPO.

Gdańsk investing in education and management. Gdańsk has signed contracts for PLN 718 million from the EU's current budget, or PLN 1,547 per resident. The voivodeship's RPO has been allocated 52 per cent (PLN 370 million). Just as in Poznań, the most expensive project implemented by the city under this programme is the training and maintenance of local government staff, on which Gdańsk will spend PLN 74 million by the end of 2017. PLN 34.9 million out of the EU funds has been allocated to the development of education and equipping vocational schools. Gdańsk has also received PLN 192 million from the POIŚ.

Katowice most effective at spending the funds. Katowice's City Hall has succeeded in securing PLN 1.04 billion in EU funds - this amounts to PLN 3,490 per resident which is definitely the best result among the biggest Polish cities. The biggest grant - PLN 338 million -  comes from the POIŚ and will finance the construction of national road no. 81 in the city. PLN 311, or 30 per cent of the EU funds obtained by Katowice, comes from the Śląsk RPO.